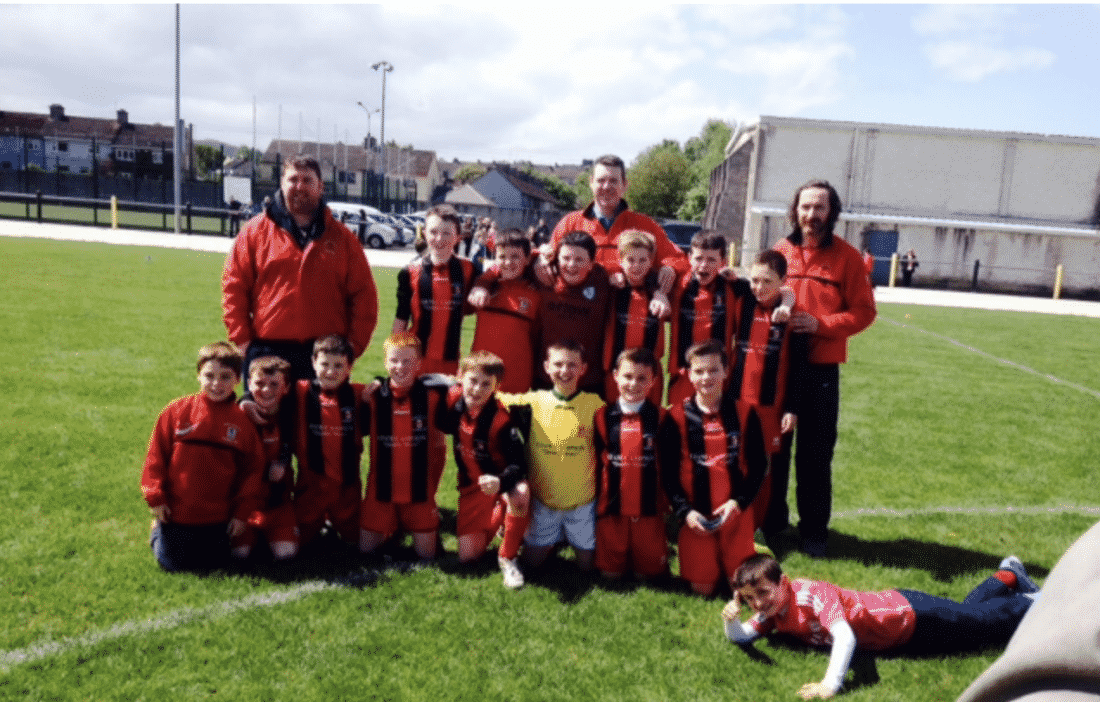 Peake Villa Fc is located in Thurles and are affiliated to the Tipperary Southern District League and the South Tipperary School Boys & Girls League.

Peake Villa AFC was founded in the quiet country district of Dualla, Co. Tipperary in 1967. It’s founder members were John Walshe, Matthew Ryan, Willie Moloney and Jim McEntee, three of these people being from Boherlahan and the latter from Thurles.

In 1967/68 Peake Villa played in the old Tipperary County Junior League Division 2 finishing runners up and also entered a youth team in the youth league. Just like the people of any other country district, the people of Boherlahan and its hinterland looked on this foreign game with suspicion, and in some cases with contempt. After many months of struggling with local GAA officials the founder members decided to break up for a while. It was shortly after this decision that John Walsh moved to Thurles and immediately realised the potential of the town to supply another good soccer club. Villa’s first game was a youth’s challenge against Ballingarry, which they won.

The seeds of the present club had been planted, and it was after this game that John Walshe started to organise a club. It was now 1970 and two years since the break up in Boherlahan. A meeting was called and an open invitation was printed in the local press. There was a large turnout and a committee was formed. It consisted of John Walsh, Tommy Harris, Johnny O’Dwyer, Jimmy Cleary, Noel McGuigan, Joe OGrady and John Butler. The club then entered teams in the Tipperary league, Tipperary Youths League, Munster Youths and the usual FAI competitions.

In its first year in the Tipperary League Villa were runners-up in the junior league and also runners-up in the Munster Youths Cup. The club spent a couple of years solely in the Tipperary League and a decision was then taken in 1972/73 to enter the junior team in the Kilkenny League. Villa started in the 2nd Division and for two seasons played exceptionally well but on each occasion were just one place short of promotion. It was in the season 1974/75 that Villa finally got promotion to the first division, which was greatly due to the outstanding efforts of Kieran Fogarty as Manager.

Peake Villa is the only club to have won the Kilkenny Shield two years in succession, 1973/74 and 1974/75, and as a 2nd Division side on both occasions. Throughout the clubs existence a youth’s policy has been earnestly practised and as a result of this, even in the early years, their youth achievements have been out standing. Villa reached the final of the Munster Youth’s Cup for three years in succession, 1969/70 to be beaten by Janesboro (Limerick), in 1970/71 to be beaten by Johnsville of Waterford and in 1971/72 again fail at the final hurdle, this time to Wembley of Limerick.

In the season 1973/74 Villa were beaten by 2-1 by Shelbourne in the quarterfinal of the FAI Youths Cup in Harolds Cross, Dublin. In the season 1974/75 Peake Villa youths won both the league and youths cup in the Kilkenny League and also won the Tipperary Youths League in the same season. During these years Peake Villa also staged some exhibition games in Thurles Greyhound Stadium to promote soccer in the town. Waterford United and Swansea were invited in the 1972/73 season and proved to be a huge success with local people and others from around the county supporting the venture. After a very enjoyable game Swansea emerged as 4-2 victors. The following season Villa themselves played Waterford and were unlucky not to win, again before a large turnout.

Throughout the clubs time in the Kilkenny & District League there were many players who represented the club on both the junior and youth Oscar Traynor teams. Noelie Jordan, Tony Cleary, Kevin O Dwyer, Noel Whelton, Robert Stakelum, Joe Mullins, Martin(Birdie) Ryan, Jimmy Connors and Jim Turner were players who proudly represented Peake Villa on these teams.

The following piece was printed in the Kilkenny & District League 50th Anniversary Yearbook launched in 1976 under the heading Kilkenny’s Ambassadors:

Martin Ryan (Peake Villa), a native of Thurles, Co. Tipperary who has played practically all of his soccer in the Kilkenny & District League. Martin (Birdie) came to prominence through his excellent displays for the Peake villa junior side at the time he was playing in the 2nd Division of the league. His strongest qualities are his all round skills and fantastic work rate. Accurate passing is a feature of his play.

He made his debut at league representative level on the Kilkenny Youth’s side last season and has held his place since. In fact, Martin is captain of this year’s youth’s team, who are in the last eight of the FAI Youth’s inter-league cup. Martin has not gained an International Cap yet but he certainly made an impact on the Leinster selectors during a Leinster trial this season at Chapelizod in Dublin. Having been only given 45 minutes to prove his worth he was automatically selected to play for Leinster against the Republic of Ireland Youth’s team the following week at Tolka Park, Dublin, and a game incidentally Leinster won. Though small in stature, Martin is very big in terms of heart and ability and must surely have a bright future ahead of him and with a player like him at Peake Villa they will surely come straight back to the dominant force they have been in the past. Martin, still a youth, is now a member of the Oscar Traynor Junior squad.

In another section of the same publication the following statement appears: “Over the past ten years particular tribute must be paid to clubs like Ormonde Villa, Emfa, Peake Villa and Bagnelstown who have constantly kept youth sides going in the league. The one major problem at youth’s (under 18) level is that junior clubs find it very difficult to finance the running of an under-age side. But surely the sooner the vast majority of junior clubs realise that “an investment in youth is an investment for the future” the sooner their own junior sides will benefit.”
From its very inception Peake Villa has shown a commitment to youths football and in 1988/89 Peake Villa entered its first schools underage team in the TSSDL league at u12 and won the u12-Cup that season. They were managed by Pat Kelly (native of Waterford), current vice-chairman of SFAI who was working in the Thurles TAX Office at the time. In September 2013 we established our Schoolgirls section after one of our own girls who had played with the boys was called to represent Ireland at u15.